Pray For Jerusalem
By David Buttram

Dear Christian Friend:
"As I write this letter the Middle East is once again on the verge of war. Israel has just made a military move into Ramallah and the headquarters of Palestinian Liberation Organization leader, Yassir Arafat. This latest move by Israel is in response to the Palestinian terrorists who are killing innocent Israelis with suicide bombings.

Many countries in the region are looking to the United States for leadership in bringing peace to the area. Historically, our country has supported Israel, but that support may be eroding. Following the terrorists' attacks on September 11, 2001, many Americans have said that maybe we should listen to the Arabs and Muslims to find out what we can do to keep the peace.

What the Arabs and Muslims want is for the United States to withdraw its support from Israel. Without our backing, Israel, they feel, can be pushed into the sea.

Last evening I listened to a Saudi government representative boldly state that "Israel is an illegitimate state...it was illegally established and is being populated by refugees coming from all over the world. These people do not have the right to come into our land." This is the stance of most area leaders and their people.

Many western countries, including the United States, believe Israel does have the right to exist— a divine right based on a promise made by God to Abraham, father of the Jewish people, that they shall have the land between Egypt and the Euphrates river
(Genesis 15:18), to be totally occupied during the Millenium
(Ezekiel 47:13-48:29). God referred to this covenant as "an everlasting covenant"
(Genesis 17:7).

During its long history, Jerusalem has undergone some thirty sieges, including attacks by the Syrians, Babylonians, Egyptians, Greeks, Romans, Turks, and Arabs. Yet, it continues to be the focal point of the Jewish people. Rich in history and tradition, Jerusalem is important to the Jew, Christian, and Muslim.

A growing belief among Christians is called Replacement Theology, which states that God rejected the Jews when they refused to accept Jesus as their Messiah. In their place, He chose the Church to be His people. The promises made to Abraham, as well as the blessings, they claim, are now applicable to the Christian church.

Even though this error has been recently revived, its origins date back to the second and third centuries AD, when a strong anti-Jew, anti-Semitic fervor emerged from the Catholic Church. Space does not permit a closer look at this heresy, but suffice it to say that when God sets a people apart to be His own and calls them His chosen people, He doesn't "unchoose" them. Neither will He disannul His promise to Israel
(Galatians 3:16-18).

Is Israel still the apple of God's eye? Yes, disobedient and rebellious as they may have been, they are still His chosen people, and we, as the New Testament church, are to pray for them and the peace of Jerusalem
(Psalm 122:6)."

This article quoted from the
Gospel Tract Harvester Newsletter, May 2002, page 3

"Tell the people of Israel to bring you pure olive oil for the lampstand, so it can be kept burning continually. The lampstand will be placed outside the inner curtain of the Most Holy Place in the Tabernacle. Aaron and his sons will keep the lamps burning in the LORD's presence day and night. This is a permanent law for the people of Israel, and it must be kept by all future generations."
(Exodus 27:20-21).

Sometime near the celebration of Christmas the Jewish people observe an eight-day holiday known as "Hanukah" (Hebrew word meaning "Dedication") in memory of the rededication of the Temple in 164 B.C. by Judas Maccabeus, after it had been polluted by Antiochus Epiphanes, the Syrian king. In 175 B.C. King Antiochus in Syria tried to force the Jews to give up their faith and to adopt Greek customs. He persecuted the Jews who refused to do this. Antiochus Epiphanes converted the Temple to the worship of Zeus, the dominant Greek god. He looted the temple and ordered all Jews to bow down to the idols placed there. He brought in a sow and placed her on the Holy Altar in desecration of God's Holiness. He brought waste and destruction- desecrated the vessels of the Lord in debauchery and drunkenness and put out the "Ner Tomid" ("Perpetual Light").

The Hasmoneans, the Maccabee family, led the Jews in a revolt. After several years of fighting, Judah and his men drove the Syrians out. On the 25th of Kislev (exactly 3 years after the defilement of the Sanctuary) in the year 165 B.C. they made their entrance into the Temple and rededicated it to the service of God.

In the Temple the priests left a light burning in obedience to the command of God, but when they prepared to rekindle this light after the victory, they found that there was only enough oil to last one day. This was a tragic discovery to the Jewish people for God's command could not then be carried out. Search was made for the oil for this Lamp. The oil must be pure and prepared under the care of the high priest and sealed with his seal. No pure oil could be found nor could any be prepared before 8 days. The small jug of oil bearing the seal of the high priest might suffice for only one day, but according to the Jewish people's tradition a MIRACLE occured, and the oil lasted for a full eight days!

There have been some additions to the orthodox ritual, but it is principally observed in the synagogue and the home by the lighting of candles set in an eight-branched Menorah to commemorate the miracle and the victory. This Menorah also contains an additional holder for the candle called Shammas (servant) with which the others are lighted. The custom is to burn one candle the first evening, two the second; progressively increased each evening until all eight are lit on the eighth night. Before the candles are lighted there are blessings recited and singing follows afterwards extolling God as Israel's Deliverer. The most popular hymn on Hanukah is Maoz Tsur ("Rock of Ages"- This hymn is not the same as the Christian Hymn by the same name).

It is so significant that the eight candles of the Hanukah Menorah are not lighted with a match but with another candle called the Shammas (Servant). Then after the Servant has given its light to all the others it is put in a high place or a special place of honor in the candleabra. Do we not see in this action a beautiful picture of the only Servant (of God) Who was exalted after He had given His light to His people? In the words of
Isaiah (49:7) we find Him described:

God exalts His Servant, Messiah Jesus, and causes kings and princes to bow down before Him. Yes, Messiah is the only Servant who is worthy to be given a position of honor! He is the One sent of God to bring us the light of salvation. Of the Messiah it is written: "The Light of Israel shall be for a fire, and the Holy One for a flame."
(Isaiah 10:17).

The eight-branched Menorah also represents the people of God who are "the lower lights." The Messiah called His followers "lights" and also commanded them to let their "light so shine before men" that their good works would be seen and the Father glorified.

The Word of God describes the Messiah Yeshua as "The Light of the World." He came as a SERVANT (Shammas) to light every man who comes to Him, and all who come to Him shall no longer walk in darkness but shall have the Light of Life! A carol of thanksgiving for this Light is found in the book of Isaiah:

"The people who walk in darkness will see a great light- a light that will shine on all who live in the land where death casts its shadow."
(Isaiah 9:2).

Yes, this Light, who is the Messiah, shines not for one night only or even eight nights, but He is "Ner Tomid" - THE PERPETUAL LIGHT Who shall shine forevermore!

There is a popular game which is played at this season to remember the miracle of light. Tops (called Driedels) are spun in this celebration. The top (also called Trendel) is shaped like a cube, on each of the lateral sides of which is found a Hebrew letter. The four Hebrew letters are: Nun, Gimmel, Hai, and Shin (or Sheen), the initials of the words which constitute the sentence Nes Gadol Hayah Sham or "A Great Miracle Happened There."

In John 10:22 we read of One who walked on Solomon's porch on this day (Feast of Dedication) who has won a victory for us greater than that of Judah Maccabeus. He has loosed us from the hands of our enemy, Satan, and has cleansed the once polluted temple by the ministry of His Holy Spirit. We, who are redeemed, rejoice in the Gift of all gifts, not only at the Feast of Dedication, but every moment of our lives when we remember the victory He wrought for us and the miracle of the Everlasting Light in our souls! Halleluia!"

This article quoted from the
Israel Light Newsletter, Rock of Israel (Ministries), 1984, pages 1-6

Chick Publications has a nice selection of tract booklets for Christians to purchase and distribute to those who are lost. They have many good "comic type" booklets that are very effective. You can view their complete listing at www.chick.com. All of their booklets are copywrited so please order from them rather than printing your own.

Here are two of their booklets that are relevant:

"Through the story of Abraham, we learn how today's Middle East crisis began, and how God always keeps His promises." 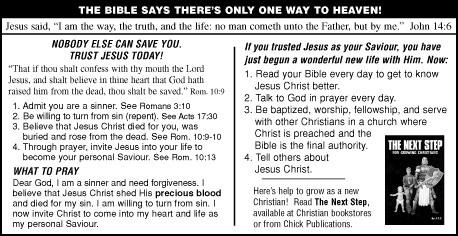 "God has promised to judge those who turn against Israel and bless those who trust her Messiah."

"Suggestions for evangelical Christians who wish to share the gospel of Jesus with Jewish people."
"In this tract, written specially for Jewish people, Rabbi Waxman comes face-to-face with prophecies of the Messiah and sees how they all point to Jesus."

Scriptures available in the Hebrew language

Scriptures available in the Arabic language