The Cult of Bahai Exposed
shared with you by
Kraig J. Rice

On Sunday morning, March 30, 2008, the Lord started dealing with me in the Spirit. He impressed upon me that there was a lot of confusion going on and that I was to minister in this area. I was not expecting this and I started scratching my head as to just exactly what the Lord had in mind because what He told me was kind of general. I realized: what could be more confusing than folks who label themselves as "Christians"- who are supposed to be obedient to Jesus Christ and His Word- to go around believing and teaching the doctrines of devils. So this is what lead me to pen this document in the hopes I could reach someone who was confused, or about to turn away from Christ, or to reach someone who had already done so to bring them back.

Just what is the doctrine of devils? In a nut-shell it is false belief. Is that dangerous? Yes, very much so. Why? Because the false belief offers another way of salvation rather than through the blood of Jesus Christ. Jesus Christ is the only way to Heaven
(John 14:6). It's interesting to note that Bahai is not a Christian cult. Rather, it is a Moslem cult with deep roots in the Arabic world. This religion elevates Baha'ullah and puts down Jesus Christ. And there are other false teachings, too- too many for me to list here, but these answers can be found in some of the "cults books" below.

Do not ever think that this is not a dangerous cult in the world. When I was teaching at Washington Elementary School in Cloverdale, Calif., during the late 1970's, an unsaved public school teacher there named Dale H. became a convert of this religion. Me and another teacher there named Blankenbaker (who was Baptist) talked to Dale about how Christ was the true God and the only way. Dale would have none of Christ and resigned his teaching position at the school and went off to be a Bahai missionary.

If you live in the continental United States you can purchase good books on cults at your local Christian book store. However, if you are a foreign national from another country you may not have ready access to this material. In that case you can view it here.

The good Lord has raised up a number of very good "Cult Busters" in the past. Several have written books now out of print in regards to Bahai false doctrine. Take a look at these pages if you are interested in this subject.

Here are 3 pages in regards to Bahai from the book
Cults and Isms by Russell P. Spittler, 1962

Here are 3 pages on Bahai from the book
Handbook of Denominations by Frank S. Mead, 1951

Here are 7 pages from the book
The Kingdom of the Cults by Walter R. Martin, 1965 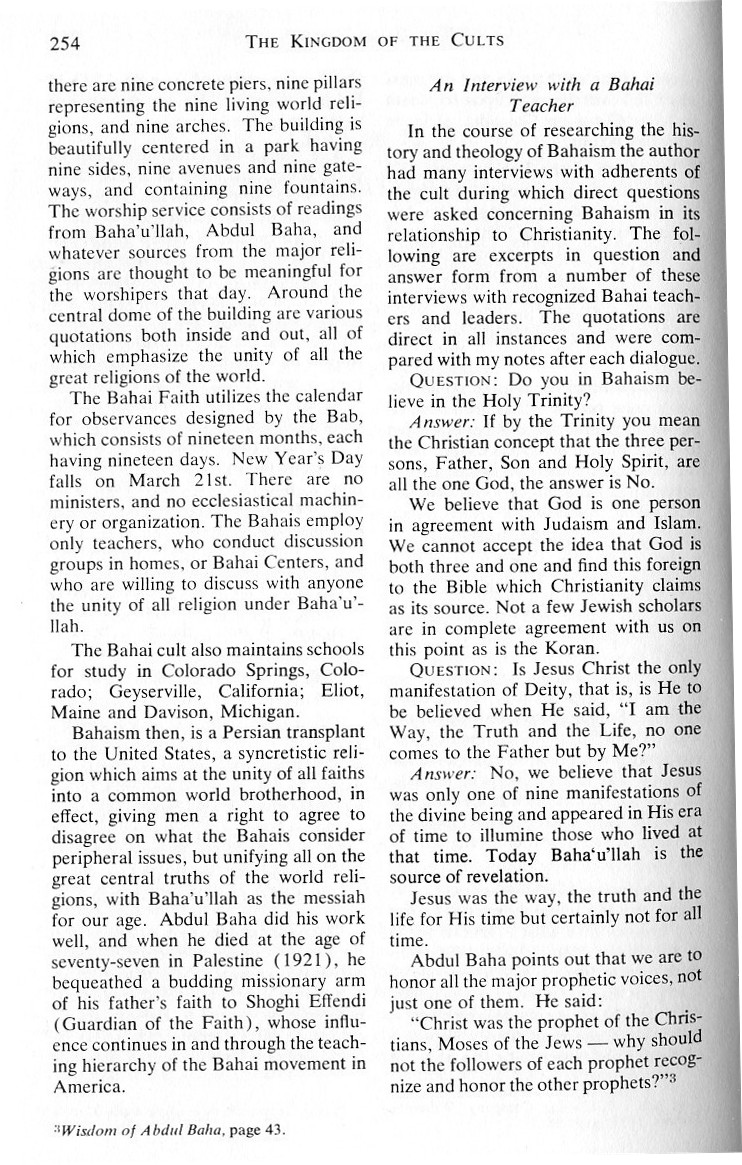 Bread On The Waters (BOW)
www.breadonthewaters.com

Click here to go to the master index page