(Page 50)
Some Selected Articles Scanned From the Pentecostal Evangel Magazine

shared with you by
Kraig J. Rice
Bread On The Waters (BOW)
www.breadonthewaters.com

On this web page is 1 scanned Pentecostal Evangel Magazine. Please click on the links below to go to the article that you want to read. Please allow a little time for your browser to load these large files. Each page must be showing completely before you can download it successfully:-)

(Note: clicking on these links will move you down this page)

Kurt Warner- Beyond The Hype 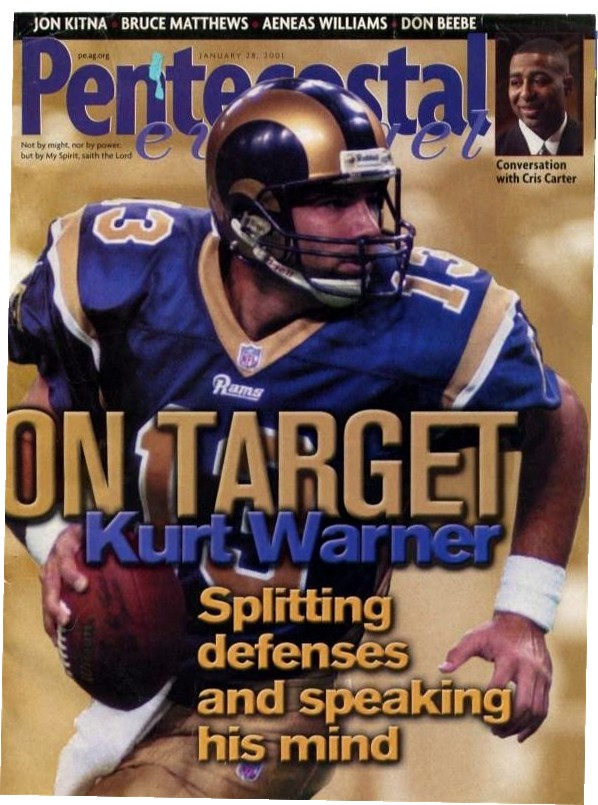 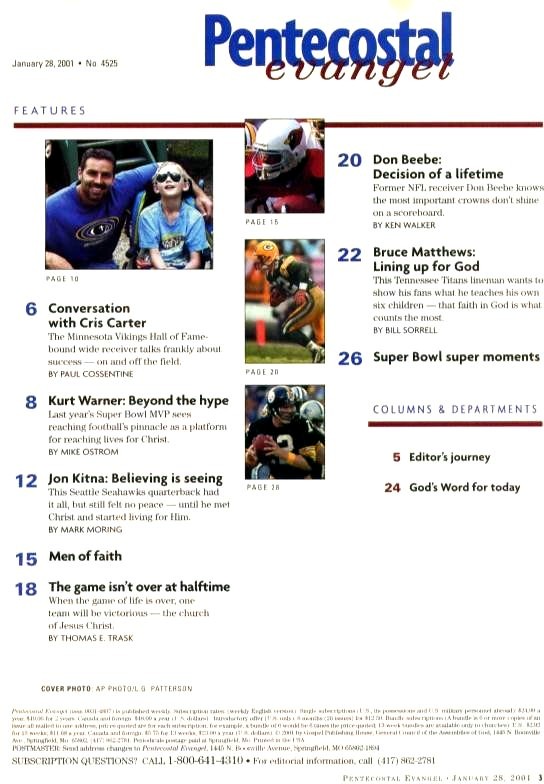 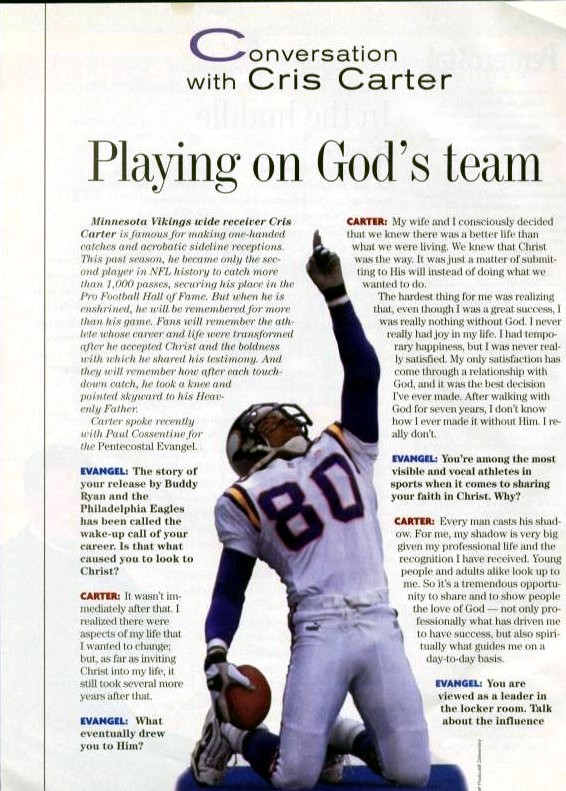 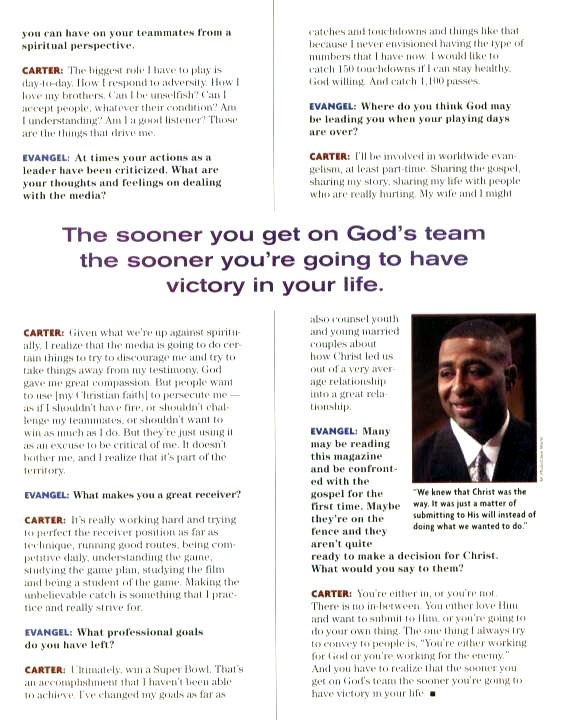 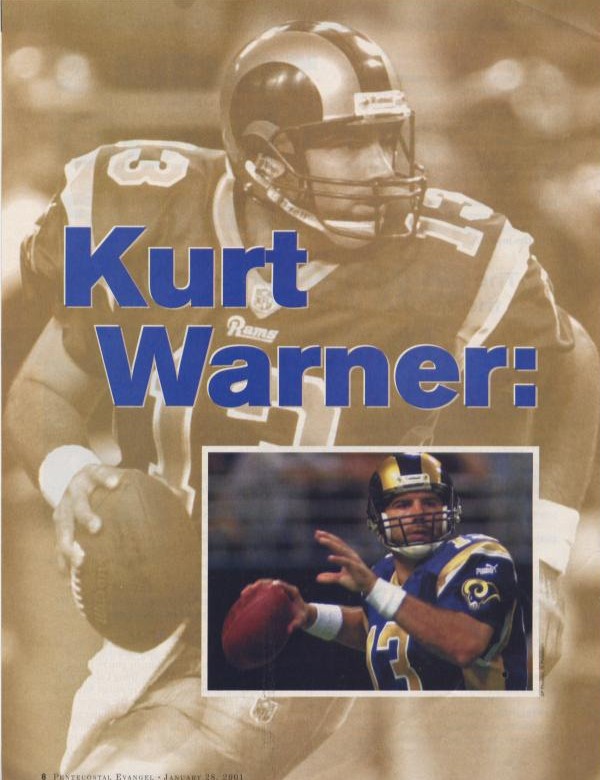 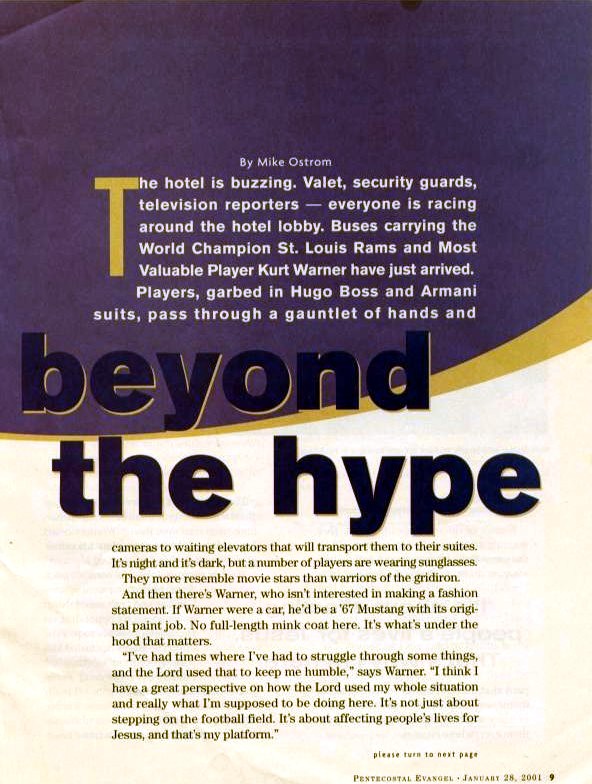 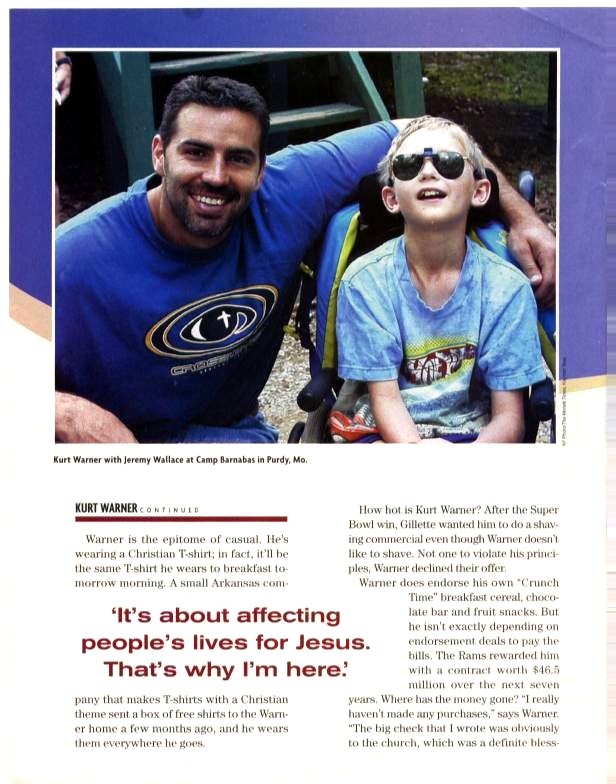 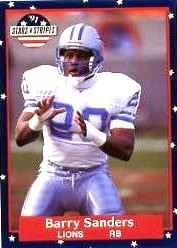 It takes more than great athletic ability to play quarterback in the NFL.

It also takes a good grip on the intangibles — qualities such as coolness under pressure, a keen understanding of the nuances of the game and what coaches like to call "vision," a capacity to see and feel and intuitively know everything that’s happening on the field.

Jon Kitna, Seattle Seahawks quarterback, has that kind of vision. He can spot a barely open receiver down the field. He can feel a defensive end bearing down on his blind side. He can often, as a result of conscientiously studying films of opponents, predict what a defense might do in a given situation.

He sees it all as a professional. He saw it all in college, too, as an All-American at Central Washington University. Well, almost all. For a long time, Kitna missed the obvious, the very thing that stood right before his eyes, trying to get his attention in every way imaginable.

Kitna was too busy pursuing everything else — football, girls and parties — to notice. So God gave him a few blatant wake-up calls.

First, Kitna and a few friends got caught shoplifting at a local grocery store. They had enough money to buy the stuff, but they stole just for the thrill of it. Nevertheless, an arrest and a $500 fine weren’t enough to get Kitna’s attention.

Then, he ran off the road while driving drunk, nearly plowing into a telephone pole at 40 miles per hour. But even that brush with death didn’t get his attention.

"I was definitely making some bad decisions," Kitna says.

Finally, during his junior year in college, Kitna got the wake-up call he needed. After a heated argument with his longtime girlfriend, Jennifer, Kitna dropped a bomb: "I don’t know what’s going to happen between you and me," he told Jennifer, "but I need to find Christ."

The statement didn’t exactly come out of nowhere. One of Kitna’s former teammates at Central Washington, Eric Boles, had gone on to the National Football League and become a Christian. During an off-season visit with some old friends at Central — including Kitna — Boles shared his newfound faith.

"After Eric got saved, he was a totally different person," Kitna says. "He had stopped doing all the things he used to do before he was a Christian. He was a changed man."

Still, Kitna wasn’t ready to take the leap of faith himself, at least not until he feared Jennifer might walk out and never come back.

"God used that incident to say, ‘You’re about to lose the best thing that’s ever happened to you,’ " Kitna says now. "That’s when I looked at Jen and said, ‘Man, I need to make a change.’ "

Now that God had his attention, Kitna figured he would start cleaning up his act — and then turn to Jesus. He shared his "plan" with Boles.

"I told him I was going to quit cussing and drinking and stealing and womanizing, and then I was going to get saved," Kitna says. "And Eric was like, ‘No, no, no. You don’t need to do all that. You can get saved right now. God wants you right where you’re at. Then He’ll make the changes.’ "

Boles suggested a simple prayer of salvation. Kitna said he would think about it.

A couple of weeks later, Boles asked Kitna if he had prayed to receive Christ as his Savior. Kitna said no. "Man," said Boles, "you really need to say that prayer."

"That night," Kitna says, "I was sitting on my bed, all alone in my apartment. And I just felt guilty. It was all over me. I thought, Here I am, the starting quarterback, with a great girlfriend, and all these things I should be happy about.

"But I wasn’t happy. I had no peace. I felt a burden. That’s when I got down on my knees and started praying. I believed who Christ was and that He died for my sins, and I wanted to accept Him as my Lord and Savior."

Then things really started happening. Kitna got a copy of My Utmost for His Highest, the devotional book by Oswald Chambers, and he started thirsting for God’s Word. Boles started a Bible study on campus, and Kitna began attending. So did Jennifer. Two months later, she became a Christian. Soon after that, they were convicted about their relationship. So they committed themselves to abstinence until their wedding day. In August 1994, 10 months after Jon had become a Christian and 8 months after Jennifer had made the same decision, they married.

Today, the Kitnas live in the Seattle suburbs with their two children, 3-year-old son Jordan and 2-year-old daughter Jada.

And today, Kitna sees things more clearly than ever. He only wishes he had seen the obvious sooner, but he’s grateful that God kept pounding on his door.

"While I was yet a sinner, while I was not acknowledging Him at all, God still protected me," Kitna says. "I just had to reach the end of my rope before I turned to Him."

Early in the 2000 football season Kitna lost his position as the Seahawks starting quarterback after struggling through the first month of the season.

Mark Moring is managing editor of Campus Life, a Christian magazine for high school students. He lives in Elburn, Ill. 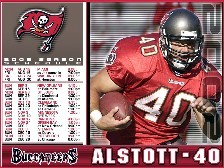 Bread On The Waters (BOW)
www.breadonthewaters.com

Click on this star to go to the master index page