Why I Started This Ministry

THE REASONS WHY I STARTED THIS MINISTRY.

The info contains descriptions of violence and death from the harvest field that may not be suitable for some small children.

WHY I STARTED THIS MINISTRY

Reaching the lost souls of the world is the job of Bread On The Waters (BOW). But what is it like for many of the several billion people alive right now who have never once heard of Jesus Christ? The answer to that question I quote from a tract entitled

"Good Enough for Them" by Oswald J. Smith

"Heathenism is characterized by cruelty. Fear grips their hearts. They are in constant dread of evil spirits, spirits that must somehow be appeased.

I am thinking now of my visit to Africa, where I heard the following incident. It was at midnight. Suddenly there was a death wail in the village; a little baby had died. Immediately the witch doctor was called. The villagers were aroused. Before very long he had pointed out a woman whom he accused of having caused the death of the little one. She immediately protested, insisting that she was innocent, but she had to be tried. They hurried her away to the tree that stood in the center of the village. She was told to climb it and then hurl herself from the topmost bough. She began to climb. Presently she sat on one of the branches and again protested her innocence. Everyone knew she was telling the truth. She was one of the finest women in the village, highly respected by all, but the witch doctor had pointed her out as the one guilty, hence she had to prove her innocence. Then she commenced climbing again, until she had reached the very highest limb of the tree. There she sat, again maintaining her innocence. Then, before the horrified gaze of the missionary, she threw herself down to the hard ground and was instantly killed, most of the bones of her body being broken. She was thereby judged guilty. Had she been innocent she would have been unharmed.

I am thinking of my visit to the aborigines of Australia. Away back in the heart of that continent there is an immense desert where it gets very hot, and there the aborigines live. Almost naked--often sleeping on the sand. A mother gives birth to a baby. Someone in the village dies. A victim must be found. Before long the witch doctor makes his way toward the newborn babe. The mother clutches it frantically to her breast, but without a moment's hesitation the witch doctor tears it from her arms, and amid her shrieks and cries, lays it on its back on the sand, forces open its mouth, takes handfuls of sand and pours it into the open mouth and down the throat, until its mouth is filled with sand, and the little thing strangles to death. Why? Because their religion demands it. There must be human sacrifice. Evil spirits have to be appeased.

I am thinking, too, of my visit to the South Sea Islands. John Geddes was one of the first missionaries to go to the South Sea islands from Canada. That was many years ago. As he stepped ashore he saw a group of people, and on the ground the body of a man. Under a tree he saw a young woman. She was the widow of the man who had died. Suddenly the natives approached her. She was unresisting. Full well she knew what would happen. They placed a cord around her neck, and then commenced to strangle her to death. John Geddes rushed toward her, in an effort to rescue her, but he was rudely pushed away and told to mind his own business and, that if he didn't he, too, would lose his life. And there, before his horrified eyes he saw that beautiful young woman slowly strangled to death, and her body placed beside that of her husband. Why? Because their religion demanded that when a husband died his widow must be strangled to death to accompany him on his journey. And if the oldest son is old enough, he is the one who must strangle his mother. Moreover, all the children, if they are too young to support themselves, must likewise be put to death. That is religion, heathen religion.

Never will I forget my visit to India. Many a time, as I walked by the side of the river, I thought of what had been told me about the day when the body of the husband was placed on a pile of wood, and then the widow, still alive and well, was placed beside him, and the two bodies, one dead and the other alive, were bound together, and then the whole was set on fire. There, amid the shrieks and screams of the dying widow, as she slowly burned to death, the natives gathered around, believing that the evil spirits were being pacified, and that now the husband would have his wife in the other life." 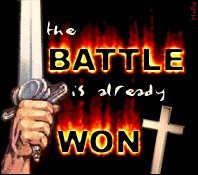 I think that now you can understand why I started Bread On The Waters and why I have thrust my sicle into the Lord's vast harvest field to help reap some of the unreached for Christ. And it is not just my responsibility but your responsibility as well if you are a born again Christian because the Lord's Great Commission is for all of His children to share His word with others. God put in my heart a burden for missions and a missionary zeal so I continue on for Him within the ranks of Bread On The Waters a missions outreach as well as an evangelistic outreach.
Written by Kraig Rice, April 2000

What we are doing now for Christ in fulfillment of His Great Commission: We pass out gospel tracts, send Bibles (and other Christian literature) to poor Christians overseas freely as we can afford it, and arrange for people who live overseas to get a free Bible Study course called ICI (International Correspondence Institute) in their own language dialect. Our goal is to get others converted to Jesus Christ by use of the written Word of God. Another goal of ours is to strengthen weak Christians in the faith through the use of the ICI Bible Study courses. These are offered by the Assemblies of God denomination.

Please hit your computer browser's "back" button in order to return to the previous menu. Thanks.