Everett Bachelder settled in Nome, Alaska, before Alaska was a state of the U.S.A. At that time it was a mission field. He wanted to win people for Christ in obedience to the Lord's Great Commission and because God had placed a burden upon his heart.

In a letter dated September 25, 1947, containing the letterhead of Nome Gospel Mission, he wrote the following to George Phillips,
"Dear brother in the Lord: In the Name of our Wonderful Saviour and Lord we greet you.....
what a blessing it was to read further of the work the Lord has given you to do for Himself. Only in eternity will it ever be revealed the souls saved and blessed by this ministry of tracts in bottles and the balloons. How wonderful that they have entered into so many countries and states. On this last trip I floated some down the big river in coffee bottles; and they may be carried a long way.

Brother Loveless here is also greatly interested in this bottle evangelism; and will assist us in getting them over to Siberia. He has made several suggestions for he has been holding forth the Word here in Nome for five years. The general drift of the current past here is directly over to Siberia, especially in the Spring, for in the Spring the winds also go that way. The suggestion is to place the bottles full of the gospel in many places on the ice out here; for it will all be frozen over about the last of October. The bottles can be put in different crevasses, and between ice floes out from Nome beach here. Then at break-up in the Spring most all of them will be drifted, Lord willing, over to the Siberian Coast. The Siberian Coast is only about 150 miles from here.

A month ago eskimos came over here to Nome from Siberia in their skin boats. About three boatloads with about thirty of them. They could readily read the Russian tracts, Gospels, Testaments, and Gospel Magazines I gave them,
- Oh, that some might be saved through this written Word.

...about February, my plans are to return up here to Eskimo Land, and that will be a good season to put the gospel bottles in the ice. Meanwhile, brother Loveless will receive the package you send, and at this same address. If the opening comes he will get some bottles out in the water before freeze-up.

Following you all in prayer; as the Word is going forth to many lands in this needy time; and in this good way.
'Cast thy bread upon the waters: for thou shalt find it after many days.' Eccl. 11:1

In the Name of our Dear Saviour:
E. Bachelder."

In starting his new missionary bottle evangelism ministry Everett faced two major problems. One problem was not knowing the ocean currents off the coast of Alaska that would partially determine where the missionary bottles would float to, and the other problem was the massive amounts of ice and snow that seemed to prohibit him from floating the bottles. He took these problems to the Lord in prayer knowing that God was greater than any problem be faced. Then he launched out on faith. He packed an ice sled pulled by a dog team (later by a snow mobile) and headed for the coast. He launched his bottles and then returned home.

One of these missionary bottles in southern waters was found by an employee of the U.S. government. This man had records, charts, and maps sent to Everett from the U.S. Coast and Geodetic Survey showing the ocean currents in reference to Nome, Alaska. The northern currents were perfect for missionary bottle evangelism purposes. The current charts indicated that bottles would either float south into the Japanese Current to Asia or would float north through the Bering Strait into the Arctic Ocean.

He used mayonnaise, peanut butter, and ketchup bottles as well as fruit containers and plastic floats. He manufactured his missionary bottles during the long and cold winter Alaskan months. Inside each bottle he stuffed a response card and tracts printed in 15 languages.

He had many helping him in his work for the Lord. His wife, Mina, and their eight children and some friends helped stuff and pray over the bottles, and other friends went with Everett onto the ice helping control the snow sleds loaded with their valuable cargo as they headed for the ice caves. It was a lot of work but it was worth it.

He was able to launch with the help of God 30,000 missionary bottles in 30 years. He received replies from Venezuela, New Guinea, Singapore, Norway, Ireland, and Africa just to name a few.

One missionary bottle did not float very far. It floated to the north of the Seward Peninsula in Alaska. There was an old Alaskan Eskimo there. The primitive Eskimo custom there, when one was old, was for him to go by himself onto the ice, and allow himself to freeze to death. This old Eskimo did just that. He did not want to be a bother to his children and family in his old age. But God loved this man and it was not His will for him to die before he received the gospel. The Eskimo was slowly freezing to death on the slab of ice when God piloted the missionary bottle right up to him. He saw it and crawled over to the edge of the ice and grabbed the bottle from out of the water. He read the pamphlet that explained how to receive Christ as Saviour and marveled to understand that God was interested even in a lonely Eskimo hunter like himself. He went back to civilization and wrote to Everett, whose name was on the leaflet, these words,
"I read your tract and then I knew somebody loves me."
God had used His Word in a bottle to save the man (in more than one way).

One missionary bottle took 3 years to float to Singapore in Malaysia. The missionary bottle arrived at the same time and place where a Buddhist young man was standing on the edge of a high cliff overlooking the rocky, dangerous coastline. He was there to commit suicide over an unhappy love affair by throwing his body off the cliff to the jagged rooks below. From his high viewpoint he saw a bottle in the ocean being rammed again and again by the waves against the rocks. The missionary bottle did not break.

The man, instead of jumping, had his curiosity excited and thought to himself,
"A bottle that refuses to break I have got to see. Before I jump, I will wait for the thing to shatter."
But God was not going to let that missionary bottle break, not when an eternal soul was at stake. The man was dying of curiosity and got tired of waiting. He carefully descended the cliff, grabbed the missionary bottle out of the water, and read the literature inside. He read and believed that Jesus Christ loved him. He took the information to a nearby Christian mission station for explanation and there the missionaries taught him and prayed him through to salvation in Jesus Christ.

In a letter to me (Kraig Rice) dated October 29, 1985, Everett penned the following,
"It was a great joy to receive your letter along with the enclosures including that very absorbing story of the history of your ministry. It really does thrill me every time I think of the fact that anytime of the day or night some bottle or float may be washed up on some beach somewhere, or even found while floating out on the ocean. One of the submarines we heard from had found one floating on the Mediterranean Sea. It was a Christian who sighted and found it, and he wrote us that the finding meant so much to the skipper, that they even idled the engines and paused for prayer."

One time Everett made a visit to the town of Barrow, Alaska's most northern Eskimo village. There, he met an Eskimo who related the following testimony to him,
"You do not know me, but I have meant to write to you. What a change has come into my life! After reading a Christian message in your bottle, I came to Christ. Then my whole family also found the Lord. I am sorry I never wrote you."
Each year this Eskimo and his family celebrate the exact day when he found that message in the bottle and accepted Christ as his Saviour.

I wrote to him about God piloting some of the missionary bottles from Bread On The Waters to Russia. He replied,
"We have the feeling that many of ours also land on Red China or Siberian soil, but so far have not had direct word from anyone, except for the young man in Odessa who found one which had drifted into that part of the Black Sea from the Bosphorus via the Mediterranean Sea."

He also told me,
"The one who originally inspired me to go ahead and float bottles was George Phillips of Tacoma, Washington. He has gone to be with the Lord and in fact just before the Lord took him home he sent us all his equipment including stationery, bottles, hot sealing equipment and special tubing to use with it."

Everett was 74 years old in 1987, serving the Lord with all his heart.
Total Reported Results: Out of the 30,000 Missionary Bottles he floated, he had 60 known conversions to Christ out of the 1,000 bottle finders who wrote to him over a period of 30 years.

In another letter to me from Everett dated September 17, 1987, he stated he had never named his gospel bottle evangelism ministry.

One of his missionary bottles landed on Aruba, a Dutch island off the coast of Venezuela. There a seminary student was sitting on the beach, depressed over his future, when a Bachelder bottle was providentially sent to him. Inside the bottle there were the usual 8 or 10 tracts in different languages. A Dutch tract was there and as he read it the Lord worked in his heart. When he found the bottle he was at the crossroads of his life. It was either go into business and make money or continue on in seminary and do the will of God. When he found the bottle he felt he should go ahead and serve the Lord instead of grasping at the deceitfulness of riches. God speaks to different people in different ways… 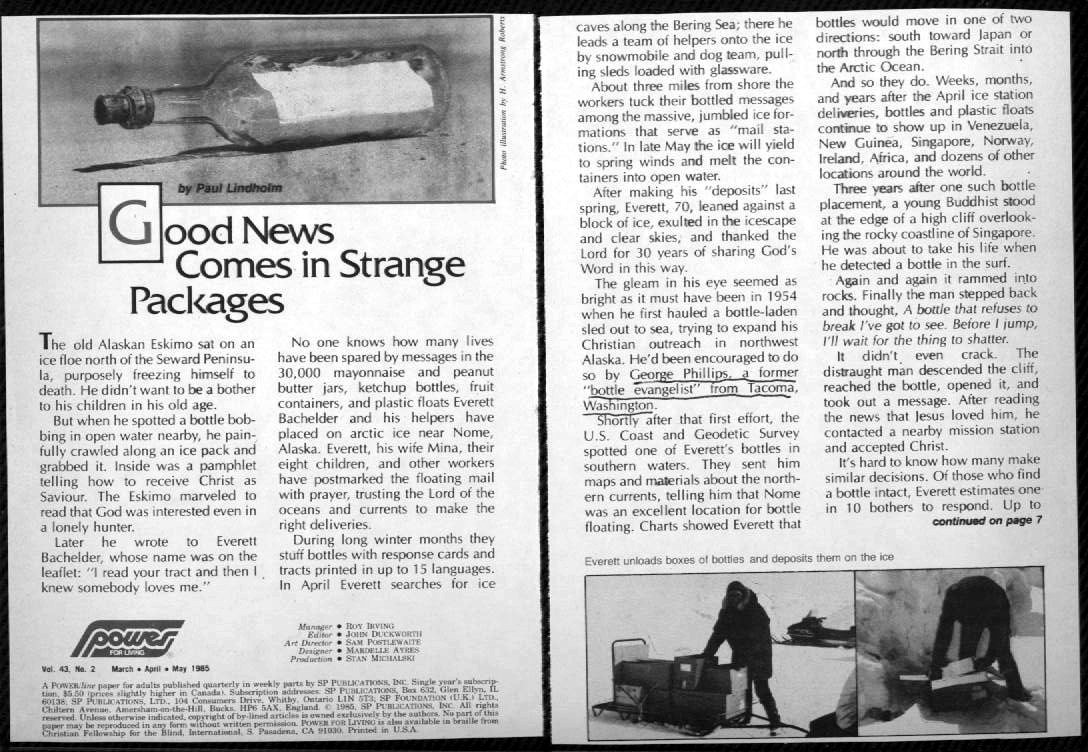 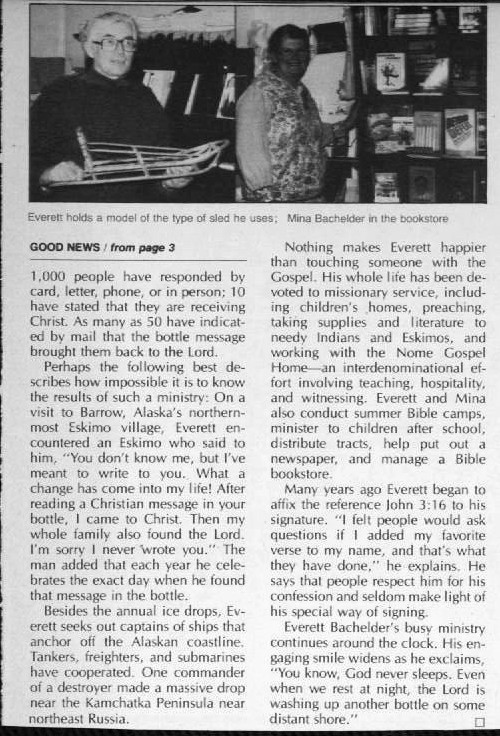 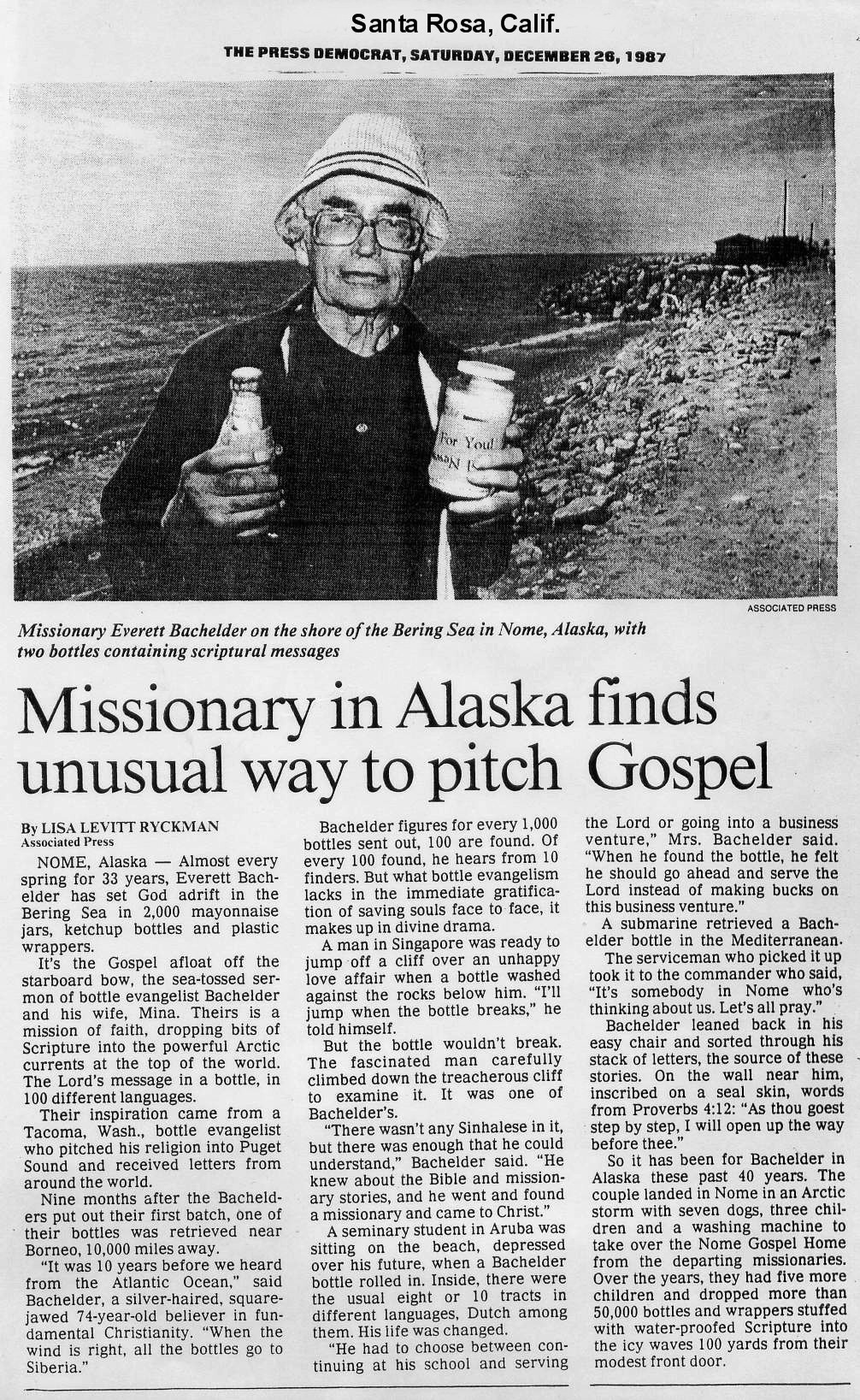 BREAD ON THE WATERS (BOW): Our web address is www.breadonthewaters.com

THIS IS ONE OF MANY DOCUMENTS THAT KRAIG JOSIAH RICE HAS WRITTEN. PLEASE FEEL FREE TO DOWNLOAD IT AND DISTRIBUTE IT TO OTHERS.

Click on the bottle to go to the main missionary bottle ministries index page.

Permission to print and reproduce this document is given as long as it is done so in its entirety.